It was a scorcher this Wednesday and there was plenty of people making the most of it in the NQ. While everyone else was slurping on craft ale and preening their lumberjack beards, we were cooped  up on the second floor of MadLab getting ready to crit. We only managed to get through three of the four pieces in the end (grumble grumble) so Arthur’s piece will be carried over to the next Tuesday session. On with the Crits! 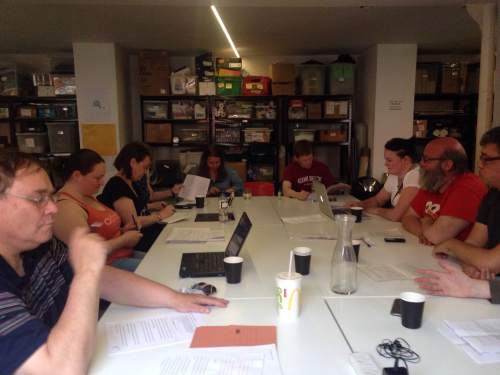 I think everyone was intrigued by the genre mash-up of horror and military fiction in this piece. Lots of comparisons to The Dirty Dozen were made and a few questions raised over the sheer number of characters in the piece. Is the story simply too short to sustain such a busy roster? No one seemed to get on with the Irish regional dialect and the general consensus was that the story would not suffer without it. A few logic questions were raised over the Artillery being used as a distraction when it could be used to kill the werewolves. A few members are hoping for a twist on the werewolf mythos given the lack of interesting directions the genre has gone down lately (bar Stephen Graham Jones’s excellent Mongrels of course). The highlight of the piece for many was the strong sense of place coupled with Denby’s happy-go-lucky characterization.

We all look forward to reading the second part next time.

Bronwin presented a chapter from her novel ‘Air’

I think everyone enjoyed the strange and wonderful world in this piece and there were lots of positive comments about the spiders vs fairies theme. A lot of readers found that the descriptions lacked clarity and called for a more perspicuous prose style, especially given the piece is aimed at a young market. The group was split down the middle as to whether the pictures worked or not, some enjoyed the interactivity while others felt they dragged the reader out of the story. Some questions over speaker dialogue. More speaker tags required for clarity? A couple of members picked up on the large info dumping regarding the historical conflict between fairies and spiders.

Everyone is looking forward to finding out where the story is going.

Emma presented a chapter from her novel ‘Westralia’.

There was lots of praise for the writing in this piece. The protagonist’s parents were a particular highlight for a lot of people. A common critique seemed to centre on the large info dump in the centre of the piece. All the information about Zeke and his father is delivered in what feels like an unnatural way. Calls to break up the POV? Perhaps Zeke gets his own viewpoint? Lots of nice comments about the hybrid plane and the little witticisms peppered throughout. Some questions over how Suzie knows the protag is going to Westralia and some questions over how a school can issue a visa for a foreign country. Some members didn’t see the logic in the father being held captive, and the expectation that the brother taking his place will solve the problem.

In sad news, Emma will be leaving us for a while as she travels back to her native Australia. Fingers crossed she’ll be back soon, we need to read the rest of her novel!

As usual, we jibbed across for a few swift ones over at Common. We’re looking forward to the next meeting already. Get scribbling all!!

Thanks to Eric for preparing these notes. Apologies that I wasn’t able to attend but I was triple booked with a visit to see my eldest son’s GCSE drama presentation taking precedence.

A short meeting today. Very few pieces in the Dropbox but still enough to hold a meeting. Unseasonal weather may have contributed. We would like to welcome Alice who was attending for the first time.

END_OF_DOCUMENT_TOKEN_TO_BE_REPLACED

Another busy meeting this week with 14 people attending and six submissions to critique. We managed to discuss three submissions so the other three will pass over to the next meeting. Because of this we will have a temporary embargo on new submissions until after the next Tuesday meeting to allow us to clear the backlog.

Before we get started with the critiques I wanted to mention a discussion we had at the end of the meeting about the increasing number of members and submissions. We obviously had another busy month. Do we let this continue? Is this just a temporary spike? Are we OK with the current system? Is a seven submission maximum still acceptable? Should we limit the critiques somehow: a limited amount of time per critique, for example?

END_OF_DOCUMENT_TOKEN_TO_BE_REPLACED

Tagged as aliens that sound like Yoda, dead starlings everywhere, murder on the menu

Hi everyone! We’re all very busy with Mancunicon right now so here’s a quick set of notes from Tuesday’s meeting…

On with the critiques! END_OF_DOCUMENT_TOKEN_TO_BE_REPLACED

Another great meeting last night with 11 attendees and 5 pieces to crit. I think everyone was in agreement that this was a very strong dropbox, and we managed to get through all five (albeit one was at the pub!). Also, for the first time I believe, we had more female members in attendance than male! Hopefully this is a sign of more gender-balanced times to come for the group!

On to the crits: END_OF_DOCUMENT_TOKEN_TO_BE_REPLACED

My thanks to Luke for taking the following notes:

It was a quiet night at the group this week with only two pieces being critiqued. A massive welcome to Peter and Angela who were joining us for the first time — we’re normally busier than this guys, honest! END_OF_DOCUMENT_TOKEN_TO_BE_REPLACED

Hello again everyone! Another excellent meeting last night with 12 people attending and three stories to critique. Eric sent his apologies, he was ill and unable to attend, so we will bump his submission to the next meeting on Tuesday 23rd February.

Before we get started I just want to pass on the enthusiasm expressed by Eliza and a number of our attendees (myself included) that last night saw our first meeting with the majority of submissions from female members. In fact with Eric’s absence that majority turned into a neat 100%. This is, I believe, a step in the right direction. Who knows, perhaps one year we will look back over the preceding months to see something of a 50/50 average.