First of all I’d like to offer a warm welcome to our latest new member Truong Mellor. Thanks for your critiques. We’re looking forward to reading your sci-fi / crime fiction over the coming months. 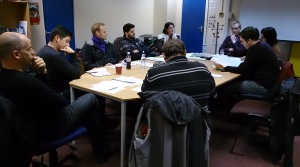 Chilly meeting last night but we should be back at MadLab again for next month. There was actually some last minute confusion about whether we would be back there last night or not. To the doubters, yes, MadLab is a real place! (I think.) Keep an eye on the Facebook group or this website and I’ll confirm venues nearer the time.

On with the crits!

We ran out of time to discuss Eliza’s story — Kikinasai — which will be the first to be read at next month’s meeting.

Apologies again for disappearing straight after the meeting but I needed food and I hadn’t eaten before the meeting due to the Peter Kay induced traffic panic in Manchester. I will stay around a little longer after next month’s meeting.

Next month’s meeting (hopefully back at MadLab): Wednesday 11th March