Thanks to everyone who attended last night’s meeting and a hearty welcome to Eliza Chan who joined us for the first time. Eliza is a former member of the Glasgow SF group and writes fantasy / weird fiction. 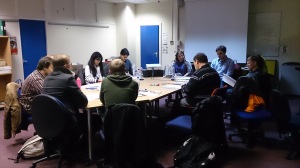 Before we start with the critiques I’d like to remind everyone that we should be back at MadLab next month but please keep checking this website or the Facegroup group for details nearer the time.

Last night we were clearing the backlog from last month’s meeting. We managed to discuss all four pieces so we are now open to submissions again!

After the meeting we headed over to Common for an informal drink and some chit-chat. We discussed the possibility of publishing a group anthology. Watch the Facegroup group for further details — Eric is going to start a new thread.

Next meeting at MadLab (unless we hear otherwise): Wednesday 12th November