Apologies for the delay in posting for this month’s meeting. I was away from the UK. Thanks to Graeme for the following notes and this photo which I managed to pilfer from Facebook . . . 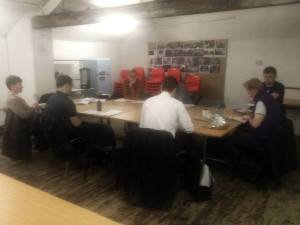 Eric was first up, with another chapter from “Autumn Man”. Feedback was complimentary about the character development and the horror, but some people felt the sequence with the children could have been extended to make them more sympathetic.

Graeme presented chapter three of “Angel in Amber”. This was generally thought to be slick and fast paced, but there were questions about the cliffhanger ending and whether it was too contrived.

Jamie’s story “Ghostbusters” was felt to be a great imaginative idea with good character relationships, but the title was questioned.

Danny’s untitled story was enjoyable and reminiscent of classic sci-fi, but needed proofreading, particularly for punctuation.

Damien presented the third chapter of “Ascension”, which was intriguing and a good change of voice. Some people wanted to see a flashback to a pivotal event, rather than just hints in dialogue.

Next month’s meeting: Wednesday 14th May