We had a late start last night with several members arriving late due to problems with the traffic. No worries, it happens. Graeme Shimmin sent his apologies that he wasn’t able to attend as planned, so his piece has been bounced to next month’s meeting. 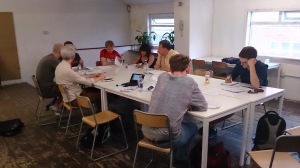 Now, as it happens, we have quite a few pieces to carry through to next month’s meeting. With nine people attending we were originally hoping to critique seven submissions, six with Graeme’s piece slipping to next month. With the late start and some extremely detailed critiques we only managed to discuss three pieces. This isn’t necessarily a bad thing. The time slipped away from us so we were obviously having a great time. I certainly took away some detailed notes and I thoroughly enjoyed the feedback. A couple of people were surprised when 9.30 rolled around; two and a half hours that disappeared very quickly.

I’m suggesting that we don’t accept any submissions for the August meeting other than what we already have in DropBox, namely:

At the end of the last meeting we had a brief discussion about the amount of time we are starting to use to critique each individual piece. Is this OK with everyone? Should we look to be more concise? Or perhaps we enjoy this level of critique? What about restricting the admission of new members? Perhaps we need a maximum number of members and a waiting list to join after that? Feel free to discuss this topic over in our Facebook group or post some suggestions in the comments box below.

As mentioned, I’m afraid I won’t be able to make next month’s August meeting. Please meet as normal. If someone could take a few notes and email those through to me for the blog that would be great. A few bullet points is fine. A photo would also be nice. I’ll post the blog on my return.

So, on with the critiques!

After finishing up at 9.30pm we held an impromptu kerbside chat about Ingress with a Hackspace member. Then we headed around to the Marble Bar for the usual chit-chat.

Next meeting: Wednesday 14th August (see you all in September!)

One response to “Meeting: 10th July”