First of all I’d like to welcome Dawn Purcell who joined us for the first time last night. Dawn is a good friend of mine; she’s also a fellow MA student and a genre writer, so I suggested she pop along to see what we get up at the group.

I actually remembered to take a few photos this month . . .

I don’t remember that heavenly glow being quite so apparent last night. How odd. 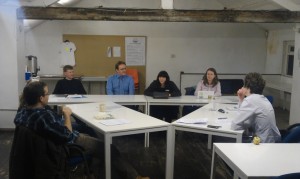 Anyway, before I start with the comments from last night, I just wanted to thank those members who have already made voluntary contributions to the group’s PayPal account. We had a visit from Hwa Young, one of the MadLab organisers, at the start of the meeting and she was very pleased to hear that we were planning on making a PayPal donation at some point in the future.

So, on with a selection of the  comments from last night . . .

Good luck to Guy who is relocating to , , , , London (his words, not mine). This means we will be seeing him mostly a lot less, but perhaps not never again.

Thanks again to everyone for attending. See you again next month!