For a trial period, starting in April, we will be running twice-monthly meetings. Meetings will take place on the first Tuesday as well as the second Wednesday of the month. This should allow us to cater for our increasing membership whilst still offering the same level of constructive criticism that we have enjoyed in the past. We’re going to cap the number of pieces of work per meeting at eight (8), though this will be lower if less than sixteen (16) pieces are submitted per month. Members are welcome to attend all meetings, whether their work is being discussed or not.

Yes we have a new URL…

…so please update your bookmarks. The old URL still works and will just redirect to our new address so don’t worry, you won’t lose us!

First of all I’d like to welcome Rebecca who joined us for the first time last night. I’d again like to apologise for not emailing you the work we planned to critique in last night’s meeting – I think we managed to scrabble together some paper copies for you to read during the meeting. I really enjoyed listening to the short prose extract you brought with you and if you drop me a copy by email I’ll forward it on to everyone.

Well there is one word to describe last night and that is ‘epic’. With nine pieces of work to critique (including Rebecca’s spoken story) we finished just a little over an hour late at 10pm. Personally I didn’t mind the late finish and overall the evening felt less rushed than last month’s stopwatch-timed event. What does everyone think?

Summary of the evening’s events as follows:

Thanks to Dave for modelling my steampunk goggles… 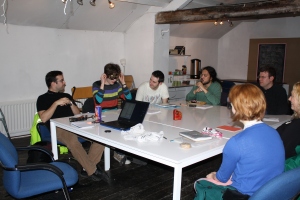 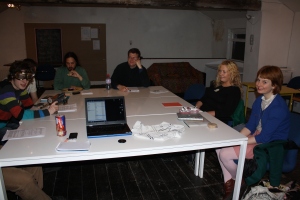 We managed a quick drink and a chat down the pub afterwards. Next meeting is at 7pm on Wednesday 9th March.